The last few days in Paris, our legs broke. Every night we went back with really tired backs and overused legs. The walk just to find a shop is no joke. I now understand how ANTM models lose their ways trying to find the agencies. It’s like one Boulevard Saint-Honore Germain can stretch from one far end to another. If only shops were to make their signages stick out, it would have been more efficient.

So, we got this spiffy cosy apartment that was near the subway, a chinese restaurant, free breakfast, a mart that sells fruits and a vinyl record store.

owner with the cafe right below

The first placed we visited in Paris, near the Abesses Metro station, The I Love You wall. The wall with I love you written everywhere in different languages. Spot the ones in English & Chinese? See the top of the wall where one lady was painted? Next to it seemed to have a figure removed. But why? I like pin up girls! lol. I guess the painting was too sleazy and inappropriate for the supposedly wall of romance.

The climb up to Basilique du Sacre-Coeur de Montmarte was one of the most stairs climbed in our entire trip.

As compared to the walk up which seemed lifeless and quiet, this area was completely the opposite. It was quite happening with walks of life, street musicians and street artists.

It was a case of why-didn’t-we-think-of-it moment when we went all the way up to see and not head down to the front of the building to take a picture. So here’s one from the internet that has a much better weather than what we got. 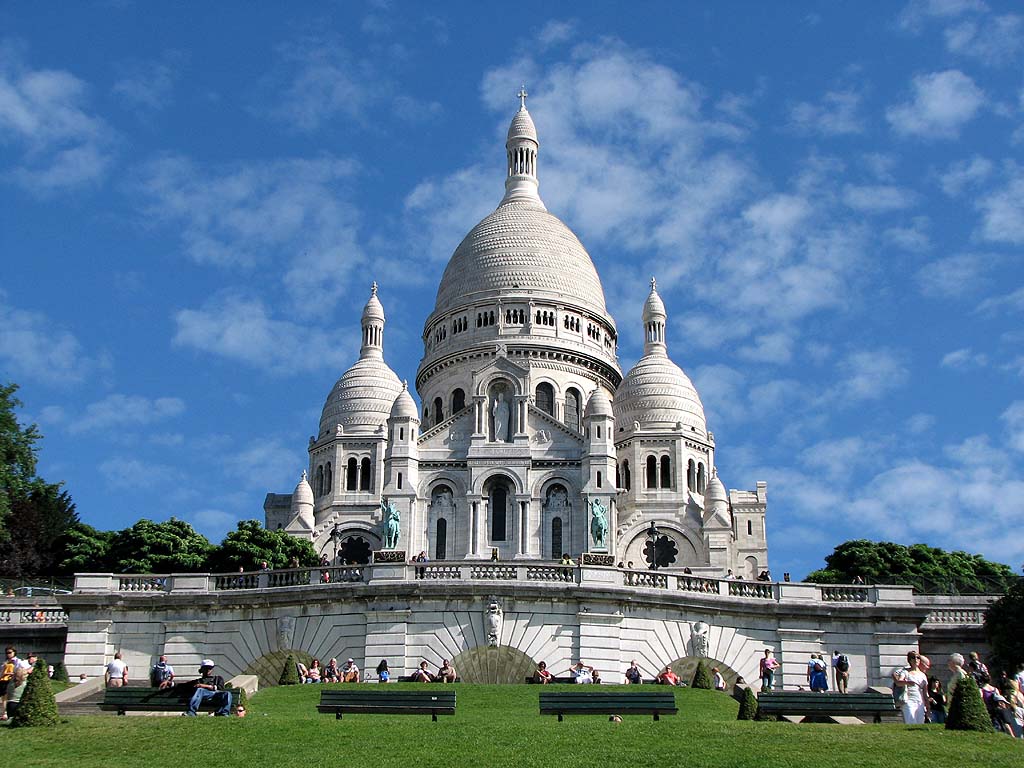 Despite the gloomy weather, the view was breathtaking! Like a huge piece of painting. The music made the atmosphere romantic. Joel bought all 3 CDs from the musician, Hugo. We sat by the stairs for a good estimated half an hour with many other tourist watching the view right in front of us & listening to the soothing melodies. I even documented it in video. What a waste! Most of the videos were in Paris, our last stop. Should have done it more often from the start of the trip. But it’s ok! At least i have some aite. Pardon me for the loud zooming of the video. It sounded as if i manually wind the zoom siol~ And so 1 flaw found of my cheap camera. #fail #dafug

Army boys camouflage in jungles, we camo right here. We are eco-friendly like that.

Gals Rock, by far the favorite amongst the vinyl record stores i stepped into. It was thee perfect shop that involves lifestyle, art & music. No sexist intentions but it’s quite awesome finding a music shop dedicating to selling records of women or female fronted bands. Rad or what? Visit the site here!

At the origin of Gals Rock is a group of friends and music fans who spend hours discovering new artists on Myspace. Tired of seeing boys dominate pop, rock and electronica, they decided to focus almost exclusively on women and promote those with talent by any and all means… via timeout

I’m loving this edited photo of them 3. Film material or something… I shall title this film “Thugs of Paris”. haha

*Raps* The lovebirds posing in front of the famous Arc de Triomphe like a G6 with a “G” van.

Luxury brands along the famous Champs-Élysées street. The LV display, giant gold tyrannosaurus rex was quite a sight.

While waiting for them to get their loo business done, we camwhored and they joined in.

when we get a chance for a group picture

The gate to abercrombie & fitch store is super exaggerated. There’s like a garden walkway to the store somemore.

Because this picture is funny. Eileen looked shock, Joel looked impatient and Wy looked like a teenage mutant ninja turtle.

Spotted this area and made them do the winter sonata shot. And this is autumn sonata.

Eileen researched on some sweet delight stores for macarons and Pierre Hermé was one of them. The macarons were the substitutes for her birthday cake and it was super yummy! I’m not a macaron lover so i’m quite surprise i loved it. It was crispy on the outside and fluffy on the inside. Sweetness was just nice and not over done. Let’s go there again on trip no.2 ? :D

Paris has a wider variety of food which means our tummies were happier. We bumped into this japanese restaurant which served really awesome ramen. But the waitress that served us to be honest sucked balls. Ironically, we thought we might have nasty racist encounters with french or italians on our trip but instead we met this japanese which is like chinese. knn. Nevertheless, the food was great.

The Louvre at night. There was a wedding shoot when we were there and i went to kaypo and look at the photographer’s dslr picture review after he triggered the shot. It was damn nice siol! The color had a gradient of multiple colors like blue, purple and golden yellow (similar to this!)  which my point and shoot camera wasn’t able to capture unfortunately.

I realised i took like nearly 6 months to post this entire Europe trip. Damn slack lol. And finally i’m left with just one last post which will include pictures of day 14th – 16th. Till then!